I was an Emergency Medical Dispatcher at the time of my arrest and I work for the Yorkshire Ambulance Service. For 6 years I had been seconded to the Yorkshire Air Ambulance as one of 2 dispatchers employed to self-dispatch the 2 Helicopters that cover the whole of Yorkshire (5 million square miles).

On 24th July 2010, I set of to work as usual at 06.30 am. En route I stopped off to get some items for the unit at the local store. I had no signs of what was going to happen. After approximately 3-4 miles down the motorway, I started to get pains in my chest (centrally). I did not think much of it at the time so carried on driving to work.

As I got nearer to work, my arms started to tingle and then all of a sudden pins and needles started to take over, my hands went into spasms, but I kept on going. After about a further 10 minutes, the pain got worse and I also started to get pins and needles in my legs. I felt very sweaty and every now and then looked into my rear view mirror and noticed my colour.

At this point I decided to pull over to ring for assistance. Unfortunately my hands were that bad that I could not get my mobile phone from my pocket. I then carried on to work. Once I arrived at work I managed to get in and attract the attention of one of my work colleagues, James Vine (Paramedic). He immediately called the other crew member, Lee Davison, who came in with the bag of the aircraft.

Also in attendance were the Chief Pilot Steve Cobb and the camera person, Jon Anderson, from the BBC as he was there filming the TV documentary series “Helicopter Heroes”. By this time I was in a lot of pain. James and Lee had wired me up to the Life Pac 12 defibrillator and were getting readings saying I was having a massive heart attack.

Unfortunately, the next bit I do not remember, as at this point I went into VF arrest (cardiac arrest). James immediately got me on the floor and performed a pre-cordial thump on me and started CPR compressions. I was down for approximately 10-12 minutes whilst both James and Lee performed CPR on me. Whilst this was going on Steve (the pilot) was trying frantically to contact the fire personnel from the LGI to get them to open the Helipad so that they could fly me to the hospital. He also had to ring the ambulance control centre to advise them of the situation happening at the unit. Being an EMD you can understand what my colleagues were also feeling in the ambulance control centre. After about 20-25 minutes they managed to get hold of the fire personnel, who had to run from the local bus station and change into their uniforms to await the arrival of the aircraft. At this point the ambulances arrived and were assisting James and Lee to revive me. I was advised by my colleagues that they had to shock me twice with the defibrillator to bring me back.

The next thing I remember is being put into the aircraft and flown to the Leeds General Infirmary specialist PCI unit to have a stent put into my LAD part of my heart. All this happened within 2 hours of me getting the first signs of pain.

I am now back at work and realise that if my colleagues had not been there, then things could have been different. I have been given permission by the BBC to show the incident from the series.

Since my arrest 6 years ago I have had the privilege to have been invited to various conferences all over the world. These include 3 conferences in America, Dec 2010 San Diego, Jun 2012 Orlando, 2014 Las Vegas. These were at the ECCU conferences. I have also been to Barcelona, Dubai, Amsterdam, Dublin and Belfast. I have done talks for other organisations including various ambulance services in the UK and also various charities. I also do charity work for SADS UK, Arrhythmia Alliance and have recently been given the honour of becoming an ambassador for St Andrews First Aid in Scotland. 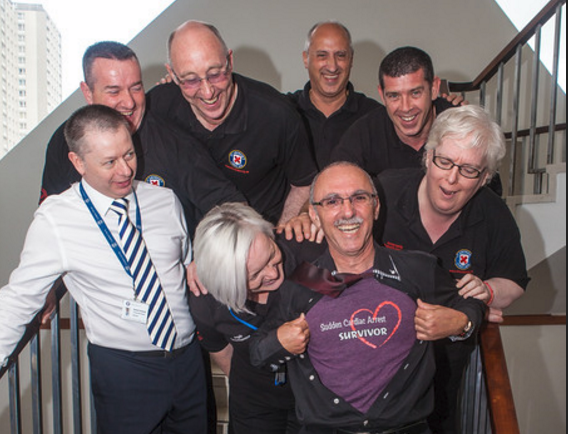 Copyright © 2019 Defibrillators For All. Website by Elara Web
Back to Top